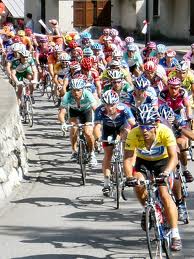 The other day was too hot to go outside so we stayed in and watched TV. But the only thing worth watching was the Tour de France. You know, the Super Bowl of professional bicycle racing that a guy named Lance something or other won a bunch of times?
While I do admit that it is pretty fascinating to watch the brightly colored clump of riders turn into a long ribbon of rainbow as they pass through narrow streets and around tight curves only to bunch back up again once the obstacle is passed; I have never had any particular interest in watching the race beyond the highlights shown in the evening news.
So, needless to say I knew next to nothing about the race. I mean what’s there to know? A bunch of insanely well conditioned athletes don eye searingly bright skin suits and helmets to take a bike ride through the French countryside as fast as they can. The one to reach the predetermined finish line is the winner, right? Wrong.
Out of curiosity, Randall went online to look up information about the race. After all such knowledge might give one an edge in the next game of Trivial Pursuit or home Jeopardy. Anyway what he found was a real eye opener.
Did you know that even though everyone racing in the Tour de France are exceptional world-class athletes, not everyone in the race is there to win the race for themselves? It’s true. Every cyclist rides in a carefully selected team. One person from that team is selected to try to win. So, what do the other people on the team do? That’s where it gets really interesting.
Danger increases substantially the further back in the pack a “Rider” is, so the team protects their “Rider” by creating a wall around him so that he will not be wrecked by other riders or passing traffic. The team also forms a wedge to push to the front of the pack in order to place him into the best position to win. Another thing they do is allow him to “draft” off of them, this helps him to conserve energy until time for the final push. Then they open a way for the “Rider” to push through and drive for the lead. Without his team to support him the “Rider” would have no chance of crossing the finish line. So even though it is the individual “Rider” in the spotlight, it is actually his whole team that wins.
Of course there are many other aspects of the Race that you can look up but I got to thinking about this one.
Each and everyone of you are on our team. Your prayers help to protect us. Your financial support helps to move us forward so that we are in the best possible position to join the team in Brazil and then to push on to accomplish the work of the Lord. Your encouraging words help to strengthen us en we feel like giving up. We could never do this without you. Thank you so much for selecting us to be your “Riders”. When the race is done we will all share in the victory together.
Posted by Randall & Paula at 7:04 AM No comments: