Drilling Wells in the Earth and in Hearts 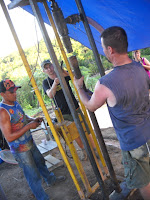 One of the things our mission team does, is go up and down the Amazon River several times a year to drill fresh water wells for various indigenous and non indigenous  river communities. Recently it was my privilege to go along and help out on one of these trips.

I was surprised at how much equipment we needed to take and loading it onto the boat was just a warm up for the work the men would be doing in the village.

When we arrived in the village late in the afternoon we discovered that no trail to the dig site had not been cleared. This threatened to throw our schedule off by as much as a day. So within a half hour of our arrival the men set to work clearing a trail, and it had grown dark by the time they reached the well site.

After quickly eating their supper they went back to work digging two water pits for flushing out the mud and sand the drill brought up as it bored into the earth. They finally decided they should come back to the boat for some rest after midnight.

Early the next morning they were back to work, finishing the pits, hauling all that heavy equipment up the hill and setting up the rig. By late afternoon they were back on schedule with the drill running. They continued to drill late into the night, then back to the boat for a few hours sleep before morning and more drilling.

This was the schedule for three full days. But they were glad to keep this grueling pace because they knew that we were bringing fresh drinking water to the village and more importantly we were also bringing, God's Living Water to the village. As the men worked at the well site, the women were involved in the village sharing God's word with the women and children.

On the last day one of the well's liner pipes collapsed bringing the work to a halt. We had done all that we could and now it would be up to another team to finish the work we had begun.

On the way home as I thought about the whole experience, Living Water and all; it  occurred to me that there was a lesson to be learned here. The Bible talks about how when we have the Holy Spirit in us we become like wells of Living Water that springs up in us and flows to those around us.

I had never really thought  much about what all goes into drilling a well. I just figured somebody shows up with a rig, starts it up and a few minutes later there's a well.

I thought it worked pretty much the same with God. He sends His Spirit and boom just like that, there it is, Living Water. I believe many Christians think this way too and then secretly wonder what the big deal is because their walk with The Lord seems rather dry and lifeless, if truth be told.

But drilling a well, whether in the earth or the heart, takes a lot of work.
First, the well site has to be chosen. - God chooses people before they are born.

Then the path needs to be cleared.  - A person must be prepared to hear and receive God's Word. Some people will accept Jesus as their savior the first time they hear the gospel but with others it may take a lifetime of God sending different people and circumstances to work on their hearts before they are ready to accept His gift of life.

Once a person gives their heart and life to The Lord, He sets to work on them.
One of the things that really struck me at the well site was how deep they had to dig to hit good water that would continue to flow even when the river was at  its lowest.

Another thing I never really thought about before was just how much gunk the drill brings up and throws out the deeper it goes.

It's the same with people hearts and lives. When we accept the Lord into our lives, we say 'All right, you can put a well of your Living Water in my heart.' But when He begins to go deeper than we're comfortable with and bringing up stuff we'd just as well prefer to stay buried, many people yell "Stop! I didn't agree to this." And they refuse to allow Him to go any further. They are satisfied with the surface water that quickly goes stagnant or the ok water a few feet down that dries up when they are "just not feeling it anymore."
But a well that will continue to remain clean and healthy and not dry up when the rain isn't falling has to go deep.

Going deep takes time and gunk is going to be brought to the surface where it needs to be dealt with and thrown out, before there is room in our hearts for The Lord to dwell and bring us His Living Water.